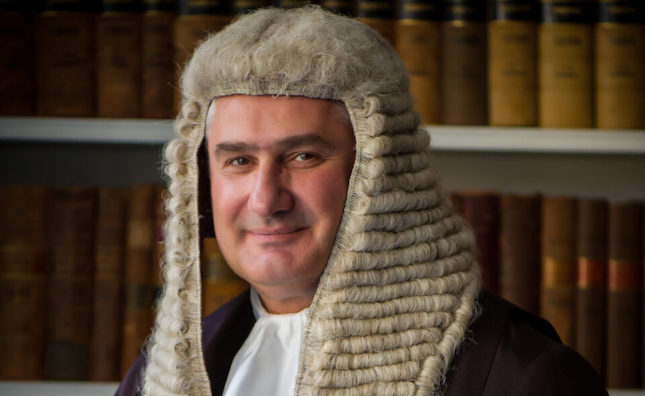 A Greek Cypriot barrister has broken the glass ceiling by becoming the first professional discipline barrister in the UK to achieve silk status.

Marios Lambis, the son of Cypriot immigrants to the UK, has become the first barrister who specialises completely in professional discipline to be appointed Queen’s Counsel in England & Wales.

Lambis, of 2 Hare Court Chambers in London, received the silk status at the Palace of Westminster. In so-doing it is said he ‘broke the glass ceiling’ for other barristers practising in the professional discipline specialism – an area of the legal sector which Lambis says has not been “taken as seriously as it should” by the profession for many years.

Originally from a criminal practice background, where he worked on major fraud and terrorist cases – including the first Iraqi hijacking trial and cases involving Al-Qaeda funding – Lambis also advised and represented the Home Office, multinational enterprises and other organisations.

However, he always had an interest in representing individuals whose professional standing, competence, integrity or health was called into question. Today, he is considered the ‘go-to’ barrister for professionals who face disciplinary proceedings.

Lambis moved exclusively into professional discipline law approximately 20 years ago which, at the time, was a small niche of the legal sector. Despite having been advised by senior legal and judicial colleagues that this was not a viable career path on its own, but rather an add-on to another form of practice, Lambis managed to blaze a new professional path for himself and future practitioners.

One of his most high-profile cases was the tragic killing of Baby P in 2010, where he presented the case against the Team Leader and Social Worker who failed to keep Baby P safe.

Lambis, the first person in his family to attend university, feels he owes much to his Cypriot parents, who left the island shortly after the second world war. The ethos installed in him by his parents, who taught him to stand up to anyone who put barriers in his way, he says, has contributed greatly to the success of his career.

“My parents left their little island in the Mediterranean and came to the UK just after the war,” Lambis said. “They arrived in London, and built a happy life for themselves, running successful restaurants and building a property empire.”

Lambis’ father looms large in his memory as evidenced by a recounting of an episode when he was approached for protection money by the notorious Kray twins, whose gang was involved in armed robberies, hijacking, arson and money laundering throughout London in the 1950s and 60s.

“A proud 6ft 3 Cypriot man,” says Lambis, “he refused. He didn’t want to be embarrassed in front of his family or shame his name. A few days later, men with knuckle dusters and bats entered his restaurant and attacked him and the shop. He fought back, as did my mother who despite being pregnant hit them with her stiletto heels.”

As luck would have it, a couple of weeks later, Lambis recounted, his father helped an old woman in the street who was being taunted by some young men. It turned out she was a relative of the Krays, and the order went out that he was protected, “whether he liked it or not”, Lambis said.

Lambis feels that this is one of many similar stories that epitomised his parents. “They were honourable and decent but fought like warriors if they had to,” he says, and “never forgot who they were.”

Lambis expresses obvious pride in identifying as “a London born Cypriot”, and sees a clear parallel with his immigrant parents, who, with everything stacked against them, broke their own glass ceiling.

“I believe my appointment paves the way for other barristers following my path, to also achieve QC status. People told me it couldn’t be done, but, together with many other incredible professionals, we’ve built this area of law into what it is today,” he concludes.

Lambis is also Recorder of the Crown Court with a licence to try Serious Sexual Offences. He is the 23rd barrister at 2 Hare Court to achieve silk status.