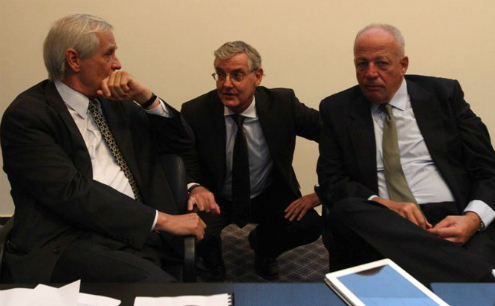 Confidence could be restored by removing capital controls, guaranteeing all domestic deposits with EU backing and adopting a national financial services strategy.

The best way to restore confidence in the island’s banking sector within a reasonable time is for the government to guarantee all deposits with the backing of the European Union, says an independent commission. “There is a lack of confidence in the banking system and we can see this every day by the deposits leaking out,” said David Lascelles, chairman of the Independent Commission on the Future of the Cyprus Banking Sector.

According to the commission’s final report, confidence could be restored by removing capital controls on the banks and by issuing a state guarantee, backed by liquidity and capital support from the EU of all domestic deposits.“Only this way will deposit leakage be staunched and recovery initiated within a reasonable time frame,” the commission said. However, “we understand this is politically very difficult,” Lascelles said, adding that Brussels had made it clear they would not be giving Cyprus any more money.

Another obstacle was that the EU did not currently have the mechanisms in place to put into effect such a backstop guarantee. Lascelles said the commission wanted to inject the idea into the debate that this was the way forward.

The commission also recommended that bank of Cyprus must take non-performing loans (NPLs) and place them in a separately incorporated entity, “to be owned by the same shareholders , funded by BoC and managed by private sector individuals with strong incentives to recover value.” Such a move would aid recovery and raise depositor confidence by creating greater transparency, the panel said.

But perhaps the most important change for Cyprus would be the adoption of a national financial services strategy to ensure the banking sector’s stable development. In the run up to the collapse, Cyprus had showed no organised response to the growing crisis, Lascelles said. There needs to be an understanding of the consequences of a high dependence on banks, and of the risks that accompany the rewards, the commission said. “This requires the commitment of resources to monitor these consequences and risks and ensure that the country and its banks are equipped to manage them.”

The commission reiterated its recommendation that co-operative banks must merge into a single joint stock entity under professional central management.“Weare sticking with that recommendation,” despite being heavily criticised, Lascelles said. “Only this way will the co-ops become a strong and efficiently managed commercial entity providing a full range of banking services and giving a stimulus to competition.”

The commission appeared confident over the island’s future as a financial centre, although Lascelles questioned the limited reach Cyprus had to the Middle East, despite its geographical location.“Although the shock to Cyprus’ ambitions as an international financial centre has been severe, it is possible to identify the steps that would need to be taken to bring about its recovery.” The commission suggested that Cyprus must raise the quality and scope of the current skill base of its international financial centre business so that customers choose to use it for its breadth and sophistication, not just the tax breaks. And banks should develop their product range to include higher class wealth management and off-balance sheet services, and custodian services and fund administration later on.

For more details read the full Independent Commission on the Future of the Cyprus Banking Sector report.