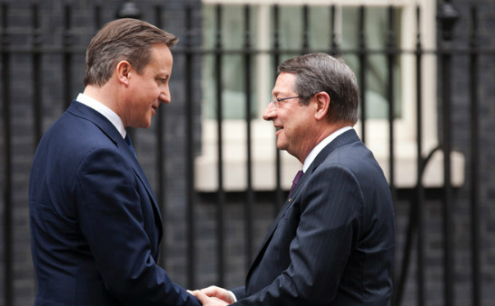 After meeting British PM David Cameron, President Anastasiades hailed the 'historic development' with regard to enabling property development within the non-military areas of the British Sovereign Base Areas (SBA).

Following ten meetings between the two sides’ negotiating teams and three and a half months, the two countries have agreed to enable the integration of a large part of bases’ territory in planning zones which will allow for property development. The zones will be defined while the area in question includes all of private property in the bases, said Anastadiades. The agreement “ensures that residents and property owners in the British Bases will enjoy equal rights for the development of property” as is afforded the rest of the population of Cyprus. It removes all existing restrictions so that all provisions which apply in the Republic regarding the acquisition and development of properties by European citizens and other third country nationals will also be applicable in the British Bases, Anastasiades added. This in turn “normalises the lives of residents in the British Bases” and provides considerable potential for the economic development of those areas while providing a wider boost to the Cyprus economy, he argued.

The arrangement further reaffirms the longstanding position of Cyprus “that the British Bases are there to be used exclusively for military purposes”, thereby safeguarding the “vital national interests” of Cyprus in relation to the military bases. Anastasiades said he will brief the relevant ministers, district offices, MPs and local authorities on the details of the agreements.

Interior Minister Socrates Hasikos clarified that previously, property owners within the bases were only allowed to carry out housing development. Now they can promote tourism, industry, “they can have everything now”. The new agreement affects three municipalities (Ipsonas, Kato Polemidia and Dherynia) and 16 communities (Asomatos, Trachoni, Kolossi, Erimi, Sotira, Paramali, Avdimou, Akrotiri, Frenaros, Avgorou, Afheritos, Pyla, Ormidhia, Xylotympou, Xylofagou and Achna) in the districts of Limassol, Larnaca and Famagusta. Hasikos clarified that the agreement provides that Cyprus and the SBAs will cooperate to establish planning zones and development policy in the above areas which are partially or fully located within the bases, excluding military areas. The Cypriot authorities will be able to issue permits for development with the prior consent of the bases authorities, he said.

The agreement further stipulates that proprietary rights and the relevant procedures of the Land Registry will continue to be recognised while previous restrictions on development (commercial, industrial use) and real estate transactions will be lifted. Property owners will now be able to sell to non-locals, Europeans and third country nationals based on the relevant Republic legislation. All infrastructure work will be paid by the Republic, while in cases where such works will also benefit the bases’ military installations, the two sides will discuss burden-sharing. The agreement also provides that arrangements will be made so that civil and criminal offences will be adjudicated in the courts of the Republic, said Hasikos.

Ruling DISY MP Lefteris Christofides said residents within the bases will feel like equal citizens for the first time in 53 years. Coalition partner DIKO leader Nicolas Papadopoulos described it as a “positive development which has troubled different governments, and of course our citizens, over many years”. Junior coalition partner EVROKO representative Michalis Georgallas welcomed the agreement as a first step, noting that the final aim remains to restore fully the sovereign rights of the Cypriot state and people over all bases territory.

Opposition AKEL said, at first glance, they see it as a “positive step” which if handled right could benefit property owners in the area. However, talk of benefits for economic growth are “exaggerated” as the problem of the Cyprus economy is not the lack of available land “but the lack of liquidity and the memorandum’s vicious cycle of recession”. AKEL expressed the hope that the government included safeguards in the agreement to avoid demographic changes in the bases in the future. Vocalising that fear, Citizens’ Alliance leader Giorgos Lillikas noted that the agreement poses a risk of the Greek Cypriots being outnumbered in the bases area, mainly by British nationals, which could lead to an attempt to hold an internal referendum and turn the bases into another colony like Gibraltar.