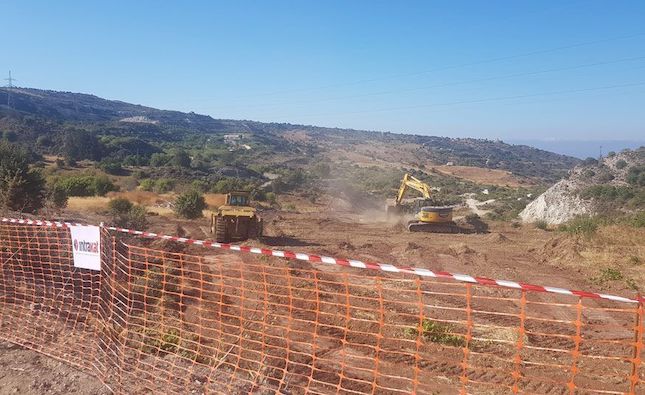 The construction of the Paphos-Polis Chrysochous highway officially began on Friday. The Minister of Transport, Communications and Works, Yannis Karousos, was on hand to mark the "historic" day, as he called it.

The Minister noted that this is a project that was initiated and fast-tracked by the President of the Republic. The first phase, which starts on Friday, concerns a two-lane road of 15.5 kilometers, with valley bridges and tunnels, and is estimated to cost €86,845,010. According to Karousos, there is a provision for its expansion, to make it to four lanes. "When (the project is) completed, the cost will exceed €300 million," he noted.

In a tweet, the President of the Republic described the highway under construction as one of the largest development projects in Cyprus. "The Paphos-Polis Chrysochous highway, which has always been one of our priorities, is now becoming a reality. Today's start of construction works fills us with optimism as one of the largest development projects with multiple benefits for the whole of Cyprus is being implemented," the President said in his tweet.

The execution of the project falls within the strategic objectives of the Ministry of Transport, Communications and Works, as part of the main road network of Cyprus, with the aim to revitalize and contribute to the sustainable development of the Paphos District, said the Minister in his address. "As an island state, Cyprus relies entirely on road transport for internal movement, which often causes difficulties in accessibility to basic services, but also in the transport of people and goods."

The Minister made a special reference to the benefits that the Project is expected to have for the residents of Polis Chrysochous. "Our aim is to mainly facilitate the accessibility of the residents of this remote area, but also to upgrade the infrastructure in the road network and to deal with road safety problems," he noted.

According to the Ministry, the new road will contribute to the economic and tourist development of the Polis Chrysochous area, since it will facilitate the attraction of investments, the implementation of new and innovative business ideas resulting in the creation of jobs, and the attraction of visitors and tourists from Cyprus and abroad.

The existence of safe road connectivity and the development of economic activity in the area will limit the number of people moving out of the economically active area, while upgrading the quality of life of the residents, the Ministry added.