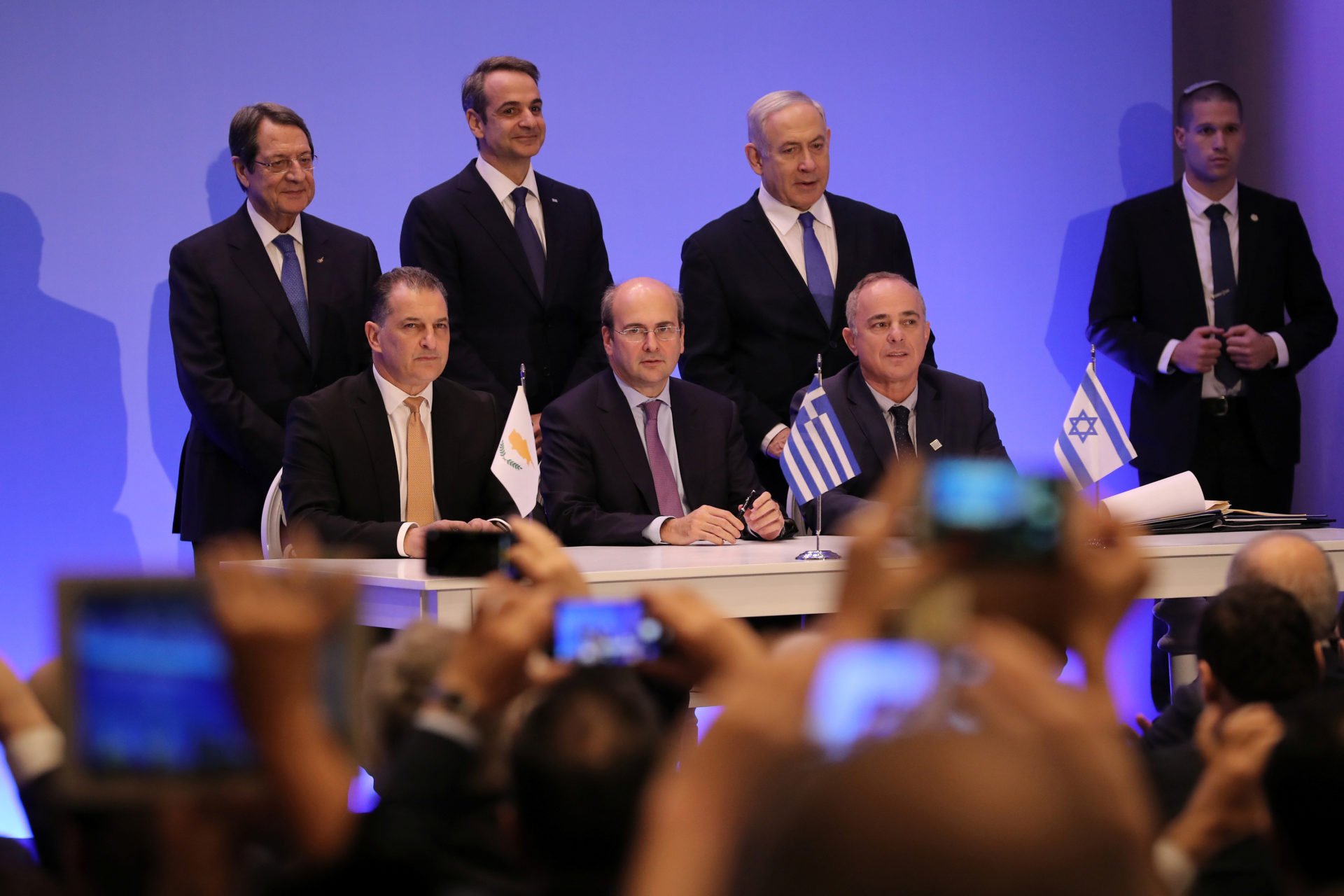 Cyprus, Greece and Israel signed in Athens on Thursday an ‘historic’ agreement for the construction of the EastMed natural gas pipeline.

The agreement was concluded shortly around 7pm at the Zappeion Hall by Greece`s Environment and Energy Minister Costis Hadzidakis, Cyprus’ Energy Minister Giorgos Lakkotrypis and their Israeli counterpart Yuval Steiniz, in the presence of Greece`s and Israel`s Prime Ministers Kyriakos Mitsotakis and Benjamin Netanyahu, and President Nicos Anastasiades.

“It is an historic act,” Anastasiades said immediately after the signing ceremony.

“It confirms in the most tangible way that the cooperation we have built over the last few years is not limited to theoretical or vacuous proclamations, but it has evolved into practical projects with geopolitical value.”

The president said projects like the EastMed confer “vast benefits” to the countries concerned, but also to the region more broadly.

The project, he stressed, has the backing of the United States and of the EU, which is also co-financing.

In an oblique dig at Turkey, Anastasiades said peace and prosperity are achieved only through collective action.

For his part, Mitsotakis called the intergovernmental agreement “the crowning of a new geopolitical partnership” between Greece, Cyprus and Israel.

“The EastMed agreement has geopolitical, economic and diplomatic dimensions. It will benefit the participating countries, but it also contributes to peace and geopolitical stability.”

Speaking in Hebrew in his opening remarks, Netanyahu said: “It is an historic day for Israel, which is becoming a powerful energy nation.”

Echoing his counterparts, the Israeli leader emphasised the pipeline project is not intended to antagonise anyone – an allusion to Turkey.

Italy, not a party to the agreement at this stage, was represented by the country’s ambassador to Greece. Italian minister for economic development Stefano Patuanelli sent a letter expressing support to the project.

The EastMed is a proposed 2,000-kilometre natural gas pipeline project that will carry the region’s reserves to mainland Europe.

It will initially have a capacity to transport 10 billion cubic meters per year of gas to Greece and Italy and other southeast European countries.

The pipeline is to start about 170 km off Cyprus’ southern coast and stretch to Otranto, Italy, via Crete and the Greek mainland.

Throughout the day, the three heads of state and their delegations had held separate bilateral talks.

Anastasiades, Mitsotakis and Netanyahu then came together for a summit meeting.

Earlier in the day, the first commercial deal for the EastMed was signed, also in Athens, between Greece’s Public Gas Corporation (Depa) and Energean.

Depa and Energean concluded a Letter of Intent (LoI) for the potential sale and purchase of 2 billion cubic metres (bcm) of natural gas per year from Energean’s gas fields offshore Israel, where the company is investing $1.7 billion for the development of the Karish & Tanin fields.

Turkish Foreign Ministry spokesman Hami Aksoy said Thursday any project that ignored the rights of Turkey and Turkish Cypriots over natural resources in the eastern Mediterranean would fail.

“The most economical and secure route to utilise the natural resources in the eastern Mediterranean and deliver them to consumption markets in Europe, including our country, is Turkey,” he said in a statement on Thursday.

Last month a Turkish official said there was no need to build the EastMed because the trans-Anatolian pipeline already existed.

“If Turkey would be interested, the door is open,” Israel’s Energy Minister Yuval Steinitz told Reuters in an interview.

“We are ready to discuss some kind of cooperation, energy cooperation, also with the Turks. We are not against the Turks but we are very much in favour of the EastMed gas pipeline project,” he said.

Back in Nicosia, ruling Disy welcomed the agreement, which it said enables Cyprus to put forward its rights as a sovereign nation.

In a statement, it reiterated that the agreement merely lays out the legal framework for the pipeline’s future construction.

The final say on the project rests with private investors who would weigh the pros and cons, the party noted.