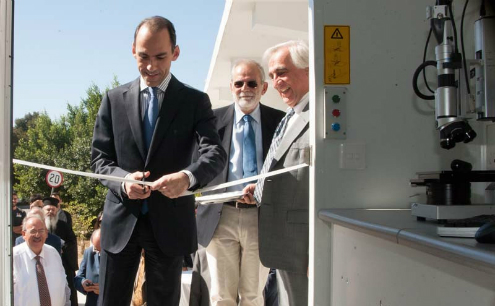 ‘Research and education should be linked to industry’

Linking research based development and research based education to industry needs is to be at the core of a new economic model for Cyprus according to Finance Minister Harris Georgiades.

The Minister was speaking ahead of the inauguration of The Cyprus Institute’s STAR-LAB project, a mobile archaeological laboratory, the first of its kind in Europe. “Cyprus is going through a challenging transformation and in such difficult times, the inauguration of such a unique laboratory is the best kind of news as it shows what we can achieve,” Georgiades said.

The Finance Minister said his presence at yesterday’s event was a clear indication and strong vote of confidence towards the research community of Cyprus from the government. “I strongly believe and hope that we can remodel our economy to link research development and research based education to industry,” he said.

STAR-LAB is a Strategic Infrastructure project of the Science and Technology in Archaeology Research Centre (STARC) of The Cyprus Institute. The project was co-financed by the European Regional Development Fund and the Republic of Cyprus through the Research Promotion Foundation (RPF), and has helped create an advanced mobile laboratory with instrumentation suitable for archaeological fieldwork and the related analysis of material remains, monuments and artefacts. STAR-LAB consists of a four-wheel drive truck with a customised cabin, adapted to accommodate researchers performing autonomous research in the field, whether an archaeological site or a museum.

The truck is equipped with state-of-the-art instruments and software to support activity in 3D data capture and analysis, geophysics and remote sensing, advanced imaging technologies and chemical-physical analyses. It is a self-sufficient unit, which offers autonomy to perform on-site analyses and provide results in real-time, overcoming the logistical difficulties that frequently arise in archaeological and cultural heritage research.

Head of the Cyprus Institute Costas Papanicolas said he believes it will radically change the way fieldwork is conducted. “We have essentially followed the paradigm that was used by medicine some 30 years ago, where instead of taking the patient to the hospital, they took the hospital to the patient. We are now taking the laboratory to the artefacts when for years we had the unenviable task of taking the artefacts to the laboratory,” he said. Papanicolas added that the project highlights the role of STARC as a technological enabler.

Acting head of the Antiquities Department Marina Ieronimidou said that the STAR-LAB will now facilitate archaeological study and research. “The project shows Cyprus has academic capabilities to contribute to important archaeological research,” she said.