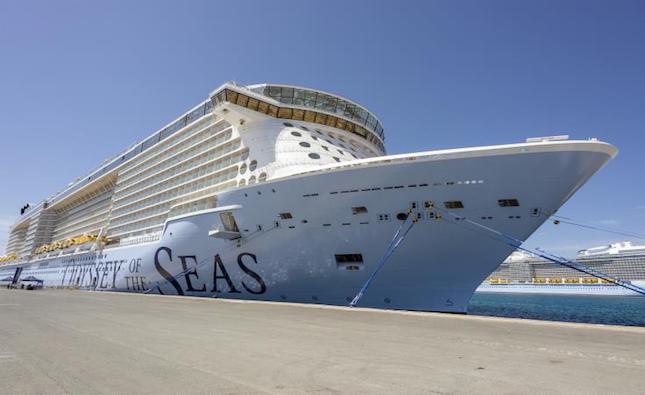 Cypriot Ministers and tourist officials visited on Sunday morning the company’s second cruise liner “Odyssey of the Seas”, which together with the “Anthem of the Seas” are receiving services from Limassol Port.

Transport Minister Yiannis Karousos said following  that proper preparations, Cyprus has sent a positive message to shipping companies in the field of cruises with the Royal Caribbean and Celestyal Cruises getting ready to set sail from Limassol port.

This, he said, is very significant for the economy and tourism and sends a message that expectations in this field are very high and we can attract many other companies that can use Cyprus as their homeport.

Demand has been unprecedented and the ministry of Transport, together with the Deputy Ministries of Tourism and Shipping are preparing a more detailed strategy to make Cyprus a centre for cruise liners.

Deputy Minister of Tourism, Savvas Perdios said that preparations began two years ago and finally were fruitful. Discussions with the Royal Caribbean have been ongoing for the last six to seven months and it is “fortunate that such a large company, the biggest in the world, with fine and largest cruise liners, has decided to turn Cyprus into its homeport”.

The importance of the choice of Cyprus lies, according to the Deputy Minister, in the fact that our country now receives a lot of advertising from overseas and “this is very important in repositioning our tourism, to change the image that people have of Cyprus abroad”.

Perdios explained that if we put together all practical benefits which include hotels, commissions, change of crew, services etc Cyprus stands to receive more than €70 million from a programme that will last four to five months and begins in July.

Cyprus has taken a unique opportunity, during the pandemic, to attract such company and assured that the benefits will be evident in the next years “because if we do well this year and show that we can offer the services they require, there’s no doubt that Cyprus will become the hub for many companies”.

Deputy Minister of Shipping, Vassilis Demetriades said that today we are capitalising an effort that started 15 months ago.

The services provided by Cyprus at the start of the pandemic, facilitating crew, repatriating seafarers are the reason, to a large extent, for this result. He also said that there are ships that although have not opted to use Cyprus as their homeport, however they prefer to come here for the services.

This by itself is very significant for the economy and said he hoped Cyprus will become a hub for crew changing over the next years.

On his part, chairman of the Hoteliers’ Association (PASYXE) Haris Loizides said the fact that Royal Caribbean, a  giant in the cruise line industry, has chosen Limassol as its homeport is a “great advantage for Cyprus, our tourism and the hotel industry”.

PASYXE, he said, welcomes this development as a cruise liner with a capacity of 5.5 thousand passengers corresponds  to 14 of our hotels, so it’s important that passengers who arrive to Cyprus will have a place to stay when they disembark the ship and mingle with the community.

Our small island is now on the cruise liner map, said Director for Europe at the Royal Caribbean, Chistos Karavos and praised cooperation with the Cypriot ministries and services.

The Jewel of the Seas, he added, will launch cruises from Limassol port on July 10. The company will also receive services for Odyssey of the Seas and Anthem of the Seas.

The Odyssey of the Seas captain, Sindre Borsheim, said services in Cyprus are excellent and his crew feels very welcome. All health protocols are adhered to, “we are safe and feel healthy and thanked the Republic of Cyprus for the services offered”.

He also said it was a difficult year for the cruise liner industry but business is gradually restarting with strict protocols in place and a specific number of passengers which will gradually increase.