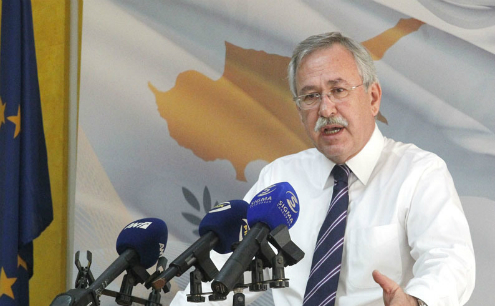 ‘Still some kinks in IPT collection’

The Interior Minister said yesterday there were still a few kinks to iron out with regards to implementing changes to the Immovable Property Tax (IPT) regulations.

“There is a problem because many people want to fulfil their obligations quickly or appeal the amount they’ve been asked to pay,” Socrates Hasikos said. He was responding to questions during a meeting with a number of Paphos communities. “I’ve spoken with the Inland Revenue Department (IRD) [on Thursday] and they are taking action and supplementing their departments,” Hasikos said.

An IRD official confirmed that additional staff was appointed across all departments in Cyprus dealing with the IPT but said there were no major delays as such. Some €14.4 million has already gone into state coffers, the official said, adding that bills had been sent to all owners of property valued at €12,500 or more on 1980 values. For 2013, property owners are getting taxed based on the value of their 1980 value of all property in their name (joint owners pay pro-rata). The land registry has been called to update their records for thousands of properties and to work alongside Inland Revenue in order to bill registered owners.

Chartered surveyor Pavlos Loizou agreed that delays have been isolated and not indicative of the system falling apart. He said that some complaints he was aware of related to people who had sold their property but nonetheless received a bill. One known problem was that owners wanted to understand how their IPT was calculated. This has been addressed by uploading the data breakdown to the JCC portal for online bill payments. People can register with JCC on www.jccsmart.com by clicking on the Inland Revenue Department icon. The inland revenue statement itself does not break down individual properties and the respective taxes, because the IRD could not cope with doing that for about 450,000 registered owners.

Those who do not want to check out the figures online via JCC can do so by showing up at IRD with their ID card for verification. Hasikos said the IRD has all the data at hand to explain people how their final tax figure came about.

But another complication is that the House of Representatives has not yet voted through the legislation, Hasikos said. The Plenum is expected to do so this coming Thursday but a number of parties are pushing for various amendments. The government wants to exempt from taxation property worth up to €5,000 and withdraw a minimum tax fee. Anything above that would get taxed normally including the first €5,000, although the law already includes exemptions e.g. for religious buildings or communal grazing grounds. For example property valued at 1980 to be worth €5,001 would get taxed as normal for the whole amount, which falls under the tax bracket of 0.6 per cent. Other parties are pushing for a higher exemption threshold or other changes.