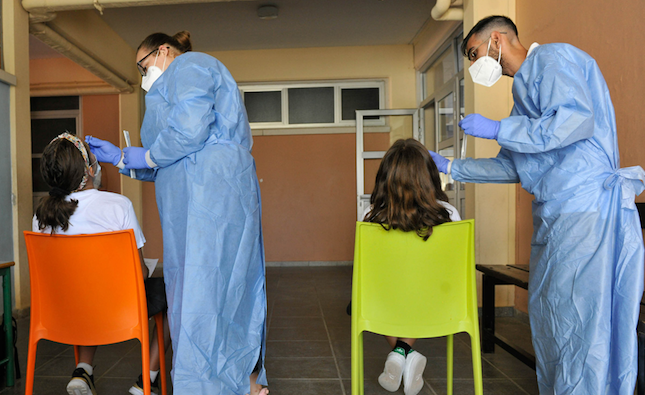 ‘Test to stay’ in kindergartens

The Health Ministry’s ‘test to stay’ school testing programme will be extended to include public and private kindergarten and primary education children in Cyprus as of Monday, March 21.

The cabinet decided on Wednesday that the measure, already applicable at all other levels of education, would be introduced for children over the age of three, attending both private and public nursery schools.

Children reported to be close contacts of a confirmed COVID-19 case, will be required to get tested for seven days from coming into contact with a person who tested positive for the virus.

However, unlike older children, kindergarten pupils over the age of three will only need to show up at a state designated testing station on the third, fifth and seventh day from coming into contact with a known case.

On the first, second, fourth and sixth day, children can take a self-test at home. The measure is optional and covers all children regardless of vaccination history. Parents opting not to have their children tested must keep them at home during the seven-day period.

More information on the procedure will be announced by the Ministry of Health.

The government has also decided to lift a ban on residents of nursing homes to leave the care home’s premises to spend the night with family.

Upon their return, residents should present a negative rapid test taken on the same day.

As of Monday, school excursions will be back on, as a ban will be lifted. A protocol on school trips will be issued in the coming days.

All other measures in effect are extended until the end of March.

Two weeks ago, Cyprus came closer to lifting all COVID-19 restrictions as the government decided to scrap the Safe Pass for short-stay areas like supermarkets, bakeries and shorten the quarantine time for positive cases to seven days.