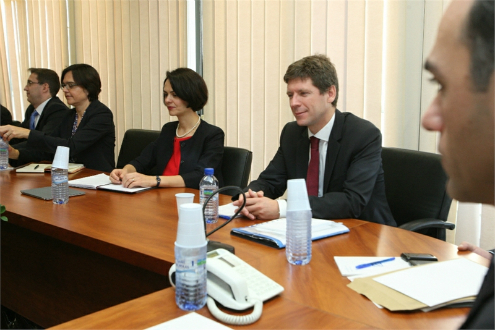 ‘The time for fun and games is over’

The banking sector may have been saved from the brink, with the taxpayer footing the bill, but the trickiest part of overhauling the economy and reining the national debt still lies ahead.

The updated Memorandum of Understanding, a copy of which the Mail has obtained, indicates what Cyprus needs to do in the immediate future – public administration reform, privatisation of state-owned enterprises, reforming the welfare system and implementing a national health scheme. Moreover, the MoU –revised after the troika’s second review mission here – makes it abundantly clear that the time for ‘fun and games’, if one could call it that, is up. Cyprus must take a number of steps, otherwise it doesn’t get the next tranche of assistance cash.

Among these imperatives is the privatisation of state-owned enterprises (SOEs), where authorities must draft a plan to be completed by year’s end. The MoU specifically names the telecoms utilitiy (CyTA), the Electricity Authority of Cyprus and the Ports Authority. This is intended to raise at least €1bn by the end of the programme and additional €400m by 2018 at the latest.

Financial transparency is another sine qua non, where the troika will accept no ifs or buts by their next review in three months. Under the heading ‘Financial transparency’, the document states that authorities must revise the legal framework “so that adequate, accurate and timely information on the beneficial ownership of Cypriot legal persons and arrangements can be provided to foreign counterparts related to money laundering and tax matters.”

On health care reform, a national health system (NHS) must be in place by end of 2015. The scheme must be financially sustainable, provide universal coverage. However, authorities are given some leeway to implement the NHS in stages. The government must present a detailed plan for the NHS by January 2014.

The programme’s key objective is for the government to meet its annual budget and deficit targets, with a view to bringing the debt to manageable levels. Authorities are urged to “continue the on-going process of fiscal consolidation [budget cuts] in order to achieve a 3 per cent of GDP primary surplus in 2017, 4 per cent of GDP in 2018 and maintain at least such a level thereafter.” To achieve this, authorities will “reduce the growth in expenditure on the public sector wage bill, social benefits and discretionary spending, while minimising the impact of consolidation on vulnerable groups.”

In a perhaps masked reference to the possibility of new taxes – which the administration has ruled out – the document states that in the event of lower-than-expected revenues or higher social spending needs, the government should stand ready to take “additional measures,” including by reducing discretionary spending. Discretionary spending are non-mandatory government expenditures, which can vary on a yearly basis. They can include, for example, defence or education. During the programme period, any cash revenues over and above projections “will be saved or used to reduce debt.” This includes “any windfall gains,” such as revenues from hydrocarbons from licencing fees for offshore blocks or signature bonuses for exploration.

PENSION PAYOUTS
IT HAS not escaped the troika’s attention that lawmakers omitted to bring their own pension payouts in line with new arrangements that apply for state officials. The MoU notes that prior to the granting of the third disbursement of financial assistance, legislation must be passed “to ensure that total annual public pension benefits do not exceed 50 per cent of the highest pensionable salary of the official’s career for Members of the House of Representatives.”

PUBLIC SECTOR REFORMS
On public sector reforms aimed at raising efficiency and furthering limit the payroll – the biggest drain on state finances – by December of this year the government must “adjust back by half an hour the regular starting and ending working times, to 7:30 – 8:30 and to 15:00 – 16:00 and further reduce overtime and related costs to the public sector wage bill, by making working time more flexible so as to cover – as a minimum – service hours from 7:00 until 17:00 in the entire public sector and service hours from 7:00 to 19:00 for public sector services with extended operating hours (including, but not limited to, healthcare and security), under regular working time.”

CENTRAL BANK
In disguised, diplomatic language, the international lenders also weigh in on the tug-of-war between the government and the Central Bank governor: “The CBC will have sufficient staff to carry out its functions in full independence as stipulated by the Treaties. Legal obstacles to the CBC’s ability to retain and employ the necessary qualified staff should be removed, prior to the granting of the third disbursement of financial assistance.”