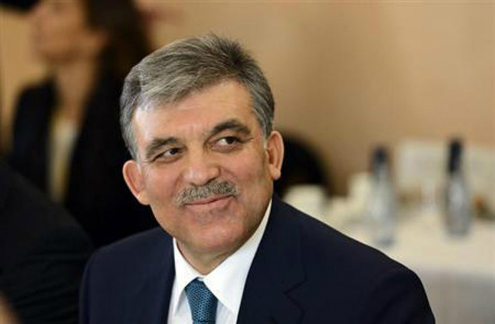 The president's speech at the UN General Assembly reflected a changing wind in the rhetoric of the Cyprus peace process and was welcomed by Turkey and ruling DISY’s coalition partners, but not the opposition.

According to Turkish daily Milliyet, a speech like the one made by President Nicos Anastasiades has not been heard in years. The paper described it as a constructive, moderate speech. Speaking to Turkish reporters in New York, Turkish President Abdullah Gul noted that for the first time, Greek Cypriots didnot walk out of the UN hall during the delivery of his own speech. Gul said that he met with the delegation of the Cyprus Republic, including Anastasiades, briefly at a reception in the UN building. He was quoted by Zaman daily saying: “We spoke at the reception. I said to them cover the distance, be determined, do not prolong this job. With the cooperation of Turkey, Cyprus and Greece, a separate pillar may be formed for the European Union in the Eastern Mediterranean.”

Turkish Foreign Minister Ahmet Davutoglu also commented on the changing climate and the agreement of Greece and Turkey to receive the Turkish Cypriot and Greek Cypriot negotiators in Athens and Ankara respectively. “Yes, I can say there is a better climate,” he said. He added that the exchange of visits would be a “very significant step towards restoring trust”, noting that it was the first time such visits have been accepted by the guarantor powers. Davutoglu said it marked “significant psychological progress but also procedural”, adding that this was reflected in the speeches of both Gul and Anastasiades at the UNGA. Regarding Anastasiades’ proposal on opening Varosha however, the Turkish FM said this would be considered as part of a comprehensive solution. He counter-proposed opening the ports and airports of the breakaway regime in exchange for the opening of Turkish ports and airports to Cyprus Republic-registered vessels and aircraft.

Commenting on the latest developments, government spokesman Christos Stylianides emphasised the importance of the president’s contacts in New York and Washington (meeting the Chinese and Russian foreign ministers and the US Vice President), saying this was not your average trip to the UNGA. “Cyprus is restoring its credibility,” he said.

During Anastasiades’ speech at the UNGA, he spoke about the need for bold action, “game-changers” that would create a win-win situation for everybody. Referring to Gul as “my friend,” Anastasiades said Greek Cypriots’ rejection of the Annan plan in 2004 was a democratic expression and did not absolve Ankara from its obligation in seeking a just settlement on Cyprus. Nonetheless, he welcomed Turkey’s “positive response” to a recent proposal of holding meetings with the chief Greek Cypriot negotiator.

In a press conference at the UN following his speech, said the peace talks needed “a new dynamic or a shock treatment” like the Varosha proposal to “give a message that this time we mean business”. Asked whether he ascertained from his meetings with representatives of the big powers that he had their support, Anastasiades replied: “They were not just good listeners. They are trying to do something.” The president is due to return to Cyprus on Sunday night.

Reaction back home to his speech varied. Opposition AKEL spokesman Giorgos Loucaides welcomed certain aspects of the speech but sought clarification on his reference to the evolving transformation of the Cyprus Republic to a bizonal, bicommunal federal state, noting that Turkey has long desired a very loose form of federation. AKEL leader Andros Kyprianou sounded alarm bells, warning of the danger that the Greek Cypriots will find themselves invited to a four-party conference, with Greece, Turkey and the Turkish Cypriots.

EDEK spokesman Demetris Papadakis criticised Anastasiades for not using the UNGA podium to “say things by their name” and denounce the ongoing crimes of Turkey in Cyprus. He warned that the latest decision to send negotiators to Athens and Ankara was leading the Cyprus problem towards a four-party conference and the return of the Annan plan.

DISY MP Prodromos Prodromou quite liked the speech, saying it was moderate and measured and made a good impression on others. Coalition partner DIKO spokesman Angelos Votsis said his speech showed the Greek Cypriot will for a solutionand sent the message that the key to the Cyprus problem is in Ankara.

EVROKO spokesman Michalis Giorgallas said the speech showed the president’s determination, readiness and good will to contribute towards a solution, while also sending the message that hydrocarbons’ exploration was not linked to the peace process.

The Greens questioned what exactlyhas changed to merit the enthusiasm of the past few days?