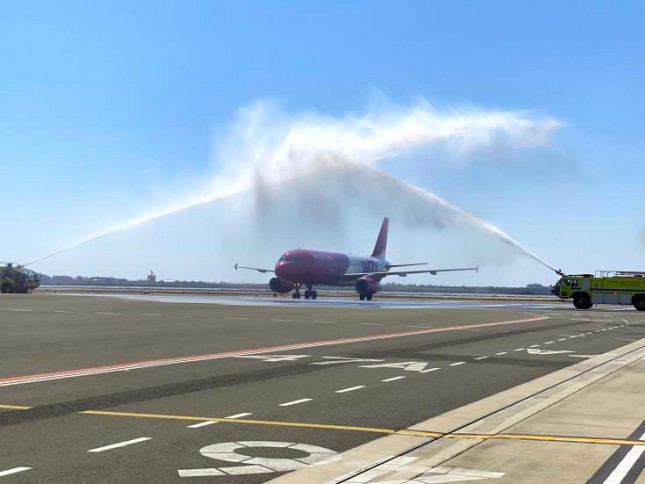 Wizz Air inaugurated on Wednesday its 28th base at Larnaca airport while a third aircraft is expected to start flights from Cyprus in August.

Three Wizz Air flights arrived a little before 10.00 am at Larnaca airport and were welcomed with a water salute.

Passengers were also greeted at the airport terminal by Hermes Airports, the company operating Cyprus airports.

A total of 20 flights are scheduled on Wednesday, with 10 arrivals and 10 departures to Krakow, Budapest, Vienna, Sofia, Athens, Thessaloniki, Copenhagen and Katowice.

She added that 40,000 passengers travelled through Cyprus airports in June – when a COVID-19 travel ban was lifted – noting that a substantial increase in traffic is expected in July, reaching 40% of the usual capacity.

Zsuzsa Poos, head of customer services at Wizz Air, called it “a very big day for the company” which inaugurated in Larnaca as its 28th base.

She recalled the first Wizz Air flight to Larnaca, 10 years ago, and said that Cyprus and Larnaca airport are among the fastest-growing tourist destinations in the company’s flight program.

The company will include flights to 36 destinations in 20 countries and there will be more than one million seats available, Poos said.

During the first week of July, there will be a total of 134 Wizz Air flights, 67 arrivals and 67 departures, while 42 of these flights will be done with the Larnaca-based aircraft.