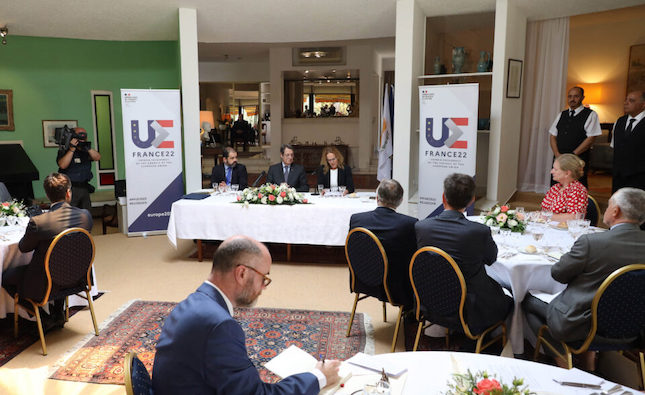 Anastasiades: Ukraine war can be catalyst for new energy sources

Russia’s war in Ukraine can act as a catalyst for new energy sources, President Nicos Anastasiades said on Wednesday, adding that Cyprus can play its own role in EU’s collective effort.

Speaking during his lunch with French ambassador to Cyprus Salina Grenet Catalano, Anastasiades focused on the developments in Ukraine, the migration issue, climate change and the Cyprus problem. He also referred to the achievements of the French presidency of the council of the European Union which ends on June 30.

The lunch, which took place at the residence of the French ambassador, was attended by other ambassadors of the EU member states.

On the Ukrainian crisis, the president said, inter alia, that “it is imperative that we remain focused on diplomatic efforts to end the Russian aggression in a way that also reflects the will of Kyiv.”

He added that the present circumstances, that led to an energy crisis, can act as a catalyst for new energy sources. “Cyprus can play its own role in this collective EU effort,” Anastasiades said.

The president explained that there is a parallel between the Ukrainian and the Cyprus problem, noting that Moscow’s pretexts for invading Ukraine are the same as those of Turkey in 1974 when it invaded Cyprus.

Anastasiades also made extensive reference to Turkey’s ongoing provocations and aggressive rhetoric against the Republic of Cyprus, as well as its claims for two states in Cyprus in violation of international law.

He assured, however, the ambassadors of the EU Member States that until the last day of his term of office he will not stop efforts to resume negotiations for a settlement of the Cyprus problem on the basis of a bizonal, bicommunal federation as envisaged by the relevant UN Security Council resolutions.

In reference to migration issue, the president said that Cyprus is facing a serious problem, being under disproportionate pressure compared with other European countries. This is due to migratory flows, especially from the non-government-controlled areas, he said, adding that asylum seekers have reached 5% of the population. Migration is an issue that the EU must address collectively, he said.