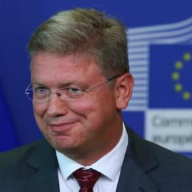 Visiting Cyprus, EU Commissioner for Enlargement Stefan Fule says the EU has been contributing actively in a way that allows both communities on the island to draw directly from the Commission’s expertise as Guardian of the Treaties.

EU Commission President Jose Manuel Barroso’s Personal Representative Pieter van Nuffel will be even more present to support the two communities in Cyprus in the months ahead, Enlargement Commissioner Stefan Fule has said.

“Van Nuffel will be even more present to support the Communities in the months ahead,” said Fule. He also said the Commission would step up its efforts to help the Turkish Cypriot community prepare for implementation of the acquis.

“It will be important to ensure that following a settlement, the European Union can count on an efficient and effective reunited Cyprus as a Member State fulfilling its acquis commitments,” Fule added. “We are also ready to jointly identify ways to step up our efforts through new measures and instruments once the settlement process has advanced.”

The Commissioner said that during his meetings with the two leaders, he came away with the feeling that they shared the EU’s understanding of the need to do more. “We now have to identify a way to move forward in a manner that all involved feel comfortable with,” said Fule.

He said he felt the mood was very different these days and added that it was a unique opportunity to put an end to the division of Cyprus. Circumstances had changed since his last visit. The regional context was different – regional stability was no longer something that could easily be taken for granted, he said.

Europe, and in particular Cyprus were through a difficult time with regard to economic developments. “The existence of hydrocarbons and the potential income is another game changer,” said Fule.

Studies clearly indicated the economic benefit Cyprus would experience from being reunited such as major investments n construction and tourism. Estimates, he said, showed that a settlement would lead to approximately a doubling of the GDP of the whole island by 2035.

Fule said Turkey was playing a constructive role to support the negotiations process “and further close relations between Cyprus and Turkey” could open up other opportunities for both. A settlement would open the Turkish market for Cyprus and the EU market for Turkish Cypriots. “The construction of an energy pipeline to Turkey could be possible,” Fule added.