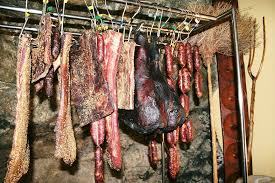 Two traditional Cypriot products, sausages and the ‘lountza’ (cured pork tenderloin) produced in the mountainous area of Pitsilia, have been included in a list of EU-protected geographic indications (PGIs) on Wednesday by the EU council.

“The ‘Lountza Pitsilias’ is a refined product made from dried meat and brine, which gets first smoked and then marinated in wine,” an announcement released by the EU council said.

“The sausage is made in the same way, with the addition of some traditional Cypriot spices. The production of these two products of excellence has remained unchanged and the know-how has been passed down from generation to generation,” the announcement added.

PGI status is awarded by the European Commission, with the aim of protecting and promoting regional food products that have a reputation or noted characteristics specific to that area.

Last October, another traditional Cypriot smoked and salted cured pork meat from Pitsilia, the Chiromeri, has gained the PGI status.

Other Cypriot products with PGI status are Glyko Triantafyllo Agrou, a rose-based fruit preserve from the village of Argos, Pafitiko Loukaniko, a sausage from Paphos, Koufeta Amygdalou Geroskipou, a variety of roasted almonds covered with sugar and Loukoumi Geroskipou a traditional confectionary sweet. The last two are produced in the village of Geroskipou near Paphos.